WHAT IS THE JUNIOR LEAGUE?​
The Junior League of McAllen was established in 1938 by women interested in fighting the health and social problems associated with the local area. It is one of 292 Junior Leagues comprised of more than 155,000 women in Canada, Mexico, the United Kingdom and the United States, united through the Association of Junior Leagues International (AJLI).

​The Junior League of McAllen, Inc. was organized January 18, 1938, as the Junior Service League of McAllen, under the sponsorship of Mrs. J.V. (Melba) Carpenter at the home of Mrs. T.E. Vessels, 701 N. Main St. The first year found members hearing lectures on social service work, assisting with health exams and vaccinations, and having the inaugural charity ball to purchase the first oxygen tent for the hospital. A community house for underprivileged girls was also operated during the first two years. 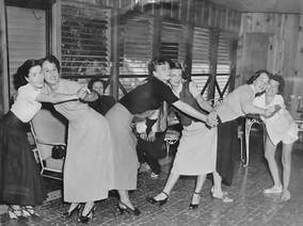 ​During the 1940s, with local doctors and National Youth Administration workers, the McAllen Child Clinic began. War relief projects consumed much of the member's time, nevertheless a building for the McAllen Child Clinic was funded and built. Governor Stevenson came to formally dedicate the clinic in 1942. League campaigned for the clinic twice netting $2,800 and $7,150. Dances continued thereafter to raise funds to operate the clinic while members staffed the clinic three days a week. League supported the clinic for the next thirty years. Annual Christmas parties began for hundreds of children at the McAllen Child Clinic. Members purchased four hospital beds and an ultraviolet lamp for the clinic. A clinic milk fund, a hospital plasma bank, and an Emergency Hospitalization Fund for clinic patients were all started. A Red Cross surgical dressing center was set up inside the McAllen Child Clinic. Grey Ladies and war bond drives kept the Leaguers busy as well. Projects for Veteran's Hospitals, the Salvation Army and the Tuberculosis Association were undertaken. The League won special commendations for their Tuberculosis Seals campaign. The organization eventually added Community Chest and American Cancer Society to their campaigns. Members raised money to help build a library for McAllen through an art show, a book review, and a fund drive. In 1948, the League gave its first Follies realizing a profit of some $10,000. Some of this money was granted to the new McAllen Memorial Library to build a children's wing. A piano was also purchased for the Methodist Community Building. 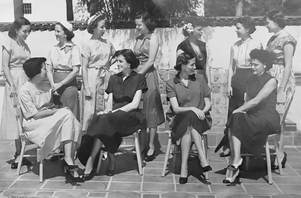 ​The Follies were presented a third time in 1953, and the proceeds were used to equip and furnish the pediatrics wing of the McAllen Municipal Hospital. A women's auxiliary to the hospital was organized. Both a food bank and a medicine bank were started at the McAllen Child Clinic. The League also began to aid Happy Home Children's Institute as well as to make monthly donations to the Crippled Children's Treatment Center where members volunteered. The League purchased furnishings for the library which was opened in 1950, and a hobby case for educational exhibits was set up. Members staffed the library and held story hours. The Children's Radio Hour on KRIO, begun in 1947, was continued with the Books Bring Adventure series. The first puppet shows were given to children in the elementary grades of the public schools, and art lectures in the public schools began as well. The fourth Follies, held in 1957, provided funds to build a teenage corner in the library. The League also began a long tradition of presenting Junior Literary Guild Books to the library. The League contributed to the construction of the YMCA swimming pool. In addition to continuing monetary support of causes from throughout the first twenty years, members also conducted a fund drive for Easter Seals. At the end of the decade, the League became interested in the Family Counseling Service and the Youth Activities Center. A Woman's Exchange was established to raise funds, and the first rummage sale was held. Members began modeling weekly at Jones & Jones to raise more money. The Senior Service League, comprised of the sustaining members, began to engage in service projects of their own. 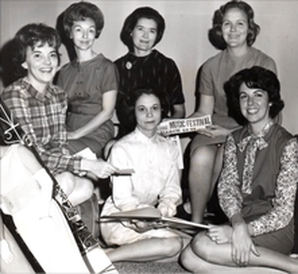 ​Members attended civil defense classes, first aid courses and bridge lessons. League held the first of many Millionaires' Parties and began house to house drives for the United Fund as well as support for Planned Parenthood. Members also assisted the Red Cross and Salvation Army after Hurricane Beulah in 1967. Joining with a local art group, League sponsored the “Patrons of the Art” series which brought famous exhibits to McAllen. Dramatic workshops for youth were held, and reading programs at the McAllen Memorial Library continued. League contributed to the International Music Festival and began sponsoring the annual Pops Concert. In the middle of the decade, members assisted teachers in special education classes. Financial aid was given to the Valley Opportunity Center, a preschool for mentally challenged children, and to Valley Botanical Gardens, which trained challenged youth. At the request of county officials, members surveyed all of the schools for mental health problems. League purchased an infant incubator for the McAllen Municipal Hospital. $1,000 was also given to establish a library for the proposed McAllen School of Professional Nursing. In 1966, a special committee was appointed to formulate plans for the McAllen International Museum of Art & Science, obtain a museum charter, and lease a building to house it in Las Palmas Park. By 1970, this building was renovated with the combined effort of the League and the City. Funds were raised from a variety of very successful events including a marketplace called the Spring Bouquet and the fifth Follies of '70. 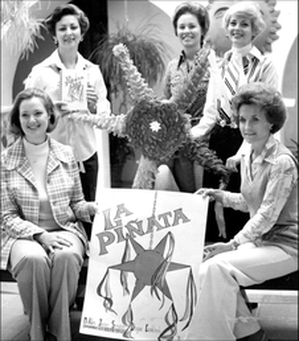 ​Members began serving as docents at the museum, and puppet shows were presented there to school children on field trips. By 1975, League contributions to McAllen International Museum reached $50,000. The Christmas Tree Forest was organized by members and became an annual tradition at the museum. League also raised the funds to landscape the museum. League began sending a representative to Girls State each year. Members started volunteering more widely in the public schools through the Volunteer Aid Program. La Piñata, the League's first cookbook, was compiled and published. With proceeds from the sale of this cookbook, a scholarship was established for a McAllen High School graduate. At the close of the decade, a Drug Abuse puppet team began performing for all sixth graders in McAllen ISD. Other community initiatives during this decade were the Volunteer Service Bureau, a hotline for the public to serve local organizations; Meals on Wheels, cooked and delivered by members; CPR classes taught by trained members; and volunteer service in nursing homes. 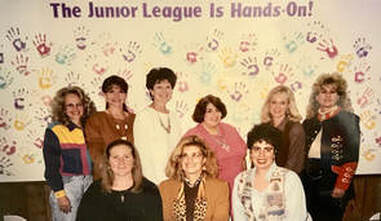 ​Serving the children in our community in new ways during the 1980s, League sponsored a children's theatre production jointly with Pan American University and gifted “Freddy the Firetruck” to the Fire Department. Members began volunteering through the Special People program with children who had someone in their family abusing drugs or alcohol. Members also began volunteering through Court Appointed Special Advocates with abused and neglected children. New volunteer work for members during this decade also included staffing the crisis phone line for Women Together, teaching at the Adult Literacy Center, and conducting parenting skills classes. The McAllen Junior Service League was admitted to the Association of Junior Leagues on April 13, 1985 as the 262nd league to join the organization and was henceforth known as the Junior League of McAllen. In the mid-1980s, League began a Sponsorship program and started publishing a community newsletter entitled Highlights which eventually became a magazine called The Bougainvillea. Beginning a twenty seven year history, the first Dias Festivos Marketplace was held in 1987. League brought the concept of Teen Court to the City of McAllen and, together with youth volunteers, staffed the program. A grant of $50,000 refurbished and furnished the Youth Crisis Center where members also volunteered their time. Members created and distributed a Youth Services Directory called The Everything Book. League also organized a Teen Health Conference. 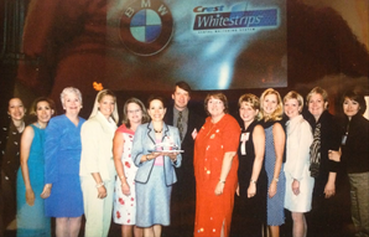 ​Successful fundraising allowed League to continue to give scholarships to graduating students and monies to local organizations. In addition to smaller grants, large donations during the 1990s were: $20,000 to the Botanical Gardens for ambitious park enhancements, $25,000 to Palmer Drug Abuse Program for a new building, $25,000 to Comfort House for a children's hospice building, and $25,000 to the Rio Grande Children's Home. In addition, ABC (A Better Classroom) grants for teachers were developed. A new home for the Junior League of McAllen was purchased at 514 E Dove Ave. Some Like it Hot, the League's second cookbook, was published. League cookbooks and programs were featured on the City of McAllen's TV channel during a cooking show run by members. Members began volunteering with Hospice and Teen Abstinence. Symphony in the Park, the first of ten annual events, began in 1994. Hallmark's mobile creativity laboratory, “Kaleidoscope”, visited McAllen twice thanks to member support. 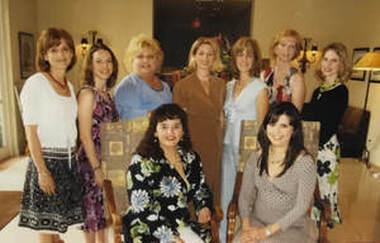 ​In 2000, members together with the community planned and built RioScape, a million dollar Discovery Park at the International Museum of Art and Science (IMAS). This park won the highest honor from League's parent organization, the AJLI/BMW Community Impact Award. Children's education remained a focal point for members as they tutored at the McAllen Boys & Girls Club and stocked School Tools. Members stood up for children by assisting the Children's Advocacy Center and taught children to stand up for themselves through Bully Talk. League created an Arts in Medicine program and volunteered at the Ronald McDonald Family Rooms. Children's health also remained a focal point for members with the creation of Kids in the Kitchen. In the years when membership in the organization soared, members also had the opportunity to serve on a Community Connections committee. These members assisted community agencies needing volunteers for a special event. This work supported the Junior League of McAllen's vision to significantly improve the quality of life of the children and youth of our community by preserving the innocence of childhood, encouraging responsibility, and promoting a safe environment. Community support of League fundraisers allowed the organization to give vast sums to the community: $50,000 to the Girl Scouts for a camp pool house, $40,000 to the Children’s Advocacy Center for their new building, $60,000 to the Vannie E. Cook Jr. Children’s Cancer & Hematology Clinic for an art room, $15,000 to the Boys & Girls Clubs of McAllen for equipment, $50,000 Quinta Mazatlan for their environmental building, $25,000 Ronald McDonald Family Rooms for a kitchen, $15,000 to the International Museum of Art & Science for “Science on a Sphere”, and $11,000 to Mission Regional Hospital for neonatal ICU equipment. 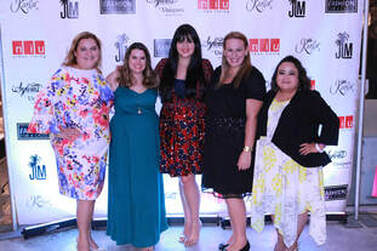 In 2016, League also began supporting The University of Texas Rio Grande Valley’s Food Pantry with hundreds of canned and dry good donations during the holiday season. In 2017, members decided to increase their efforts in support of promoting health, wellness and nutrition for the entire family. The expansion of Kids in the Kitchen to include smaller individualized programming was initiated with local public schools. In response to Hurricane Harvey, members collected clothing, food, cleaning products and toiletries for families in Beaumont, Houston, Rockport, Port Aransas and Corpus Christi. League collaborated with the McAllen Boys and Girls Club to adopt families during the 2017 holiday season. The Junior League of McAllen welcomes women of all races, religions and national origins who exemplify a commitment to voluntarism to join the organization. Members must be at least 23 years old and a resident of McAllen or a community adjacent to McAllen. The Junior League of McAllen also thanks its members, past and present, and the entire community for supporting its efforts for the last 80 years.